An Analysis on Coastal Erosion in Trivandrum Using ODC

Increasingly changing climate conditions, rising temperatures, and decreasing precipitation has contributed to wildfires, droughts, hurricanes, and floods posing a serious threat to people and the planet. The devastating impact of climate change is no different in the coastal regions. Coastal erosion is one of the alarming aftermaths of human activities and environmental changes making the coastal dynamic action (wave, current, wind) lose balance in the coastal processes and the long-term loss of sediments of coastal zone leading to the destruction of coastline retreat and beach erosion.

At present, coastal erosion has become a very common phenomenon, resulting in the erosion of about 70 percent of the sandy coast worldwide. According to a technical report by India’s National Centre for Coastal Research (NCCR) under the Union Ministry of Earth Sciences, 32 percent of India’s coastline underwent sea erosion and 27 percent of it expanded between 1990 and 2018. As per the IPCC 6th assessment report,coastal areas will see continued sea-level rise throughout the 21st century, contributing to more frequent and severe coastal flooding in low-lying areas and coastal erosion. Extreme sea-level events that previously occurred once in 100 years could happen every year by the end of this century.

Coastal land is being swallowed by seawater, and coastal villages and houses are forced to move inland, squeezing the living space of humans, destroying the beach biodiversity, and ecological balance, impacting directly and indirectly on human life and the natural environment. Over the years, monitoring of coastal erosion has become challenging and expensive using drones or aerial photography using airplanes. Field surveys are again time-consuming and the present covid scenario has made on-site visits chaotic.

The difficulties encountered in analyzing and managing environmental degradation are: 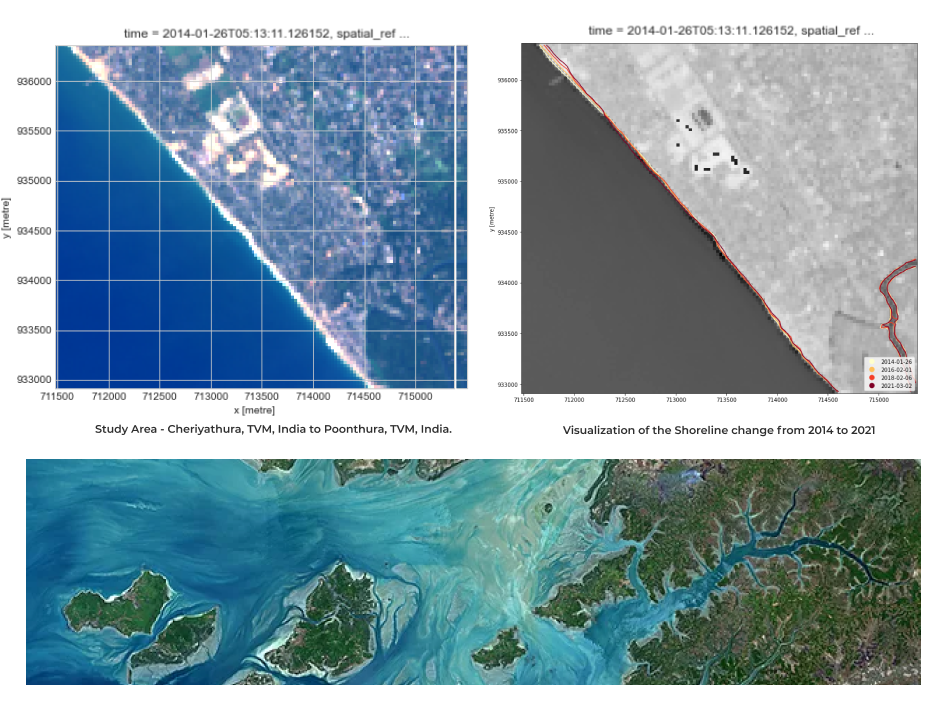 The study analyses shorelines in detail and their evolution (erosion/accretion) associated with human intervention and climatic conditions.

With the help of satellite images taken over the years, monitoring of coastal erosion is done. Using Open Data Cube (ODC) and satellite data from the Landsat program, coastal erosion can be studied. We’ve been able to successfully analyze coastal erosion along the shore of Trivandrum, Kerala, India using ODC. We have taken selected images from 2014 to 2021 rather than time-series (composite) images.

Based on this study,

Coastal changes are attracting more focus since they are important environmental indicators that directly impact coastal economic development and land management. The results from our study show the effect of coastal erosion and accretion over the years along the coast of Trivandrum. Rapid shoreline changes can create catastrophic social and economic problems along populated strands. This study proves the ease of use of open-source platforms like ODC to make informed decisions with respect to our environment.

The most important concern for all of us today is protecting the environment. Combining our technological competency and essential industry knowledge, we offer sustainable next-generation environment solutions for a better future.

It’s never too late to protect the planet, get started. Learn more about the expertise and resources that helped us achieve success in this study.

Need help with a similar study?
Let us know