Is ‘Metaverse’ the next stage in Internet Evolution?

The technological realm is currently hyped with the debut of Metaverse. The concept of metaverse has been established through an awareness of future accomplishments and past failures. The excitement around the metaverse may be exaggerated, but the promises that it is said to deliver are extremely appealing. In the end, it all boils down to the decisions humans make with this next expected chapter in the evolution of the internet as we know it.

The concept of a ‘Metaverse’ is being realized as we speak, but it is yet too far away to be relished. For a long time, there was a lot of buzz surrounding the term metaverse. The recent revelation that the parent company of Facebook, Instagram, and WhatsApp is called ‘Meta’ has roiled the waters once more. Understanding what the metaverse is, its benefits and drawbacks, and so on has almost become a necessity more than a curiosity for individuals across the world.

What is the reason behind Mark Zuckerberg’s enthusiastic focus on the journey of Facebook (now Meta) towards metaverse? Will Apple’s ‘Appleverse’ be a competition for Meta’s ‘Zuckerverse’? Several questions are being raised all around the world, and the answers cannot be regarded as definite. People both adore and despise the concept of the metaverse.

So let us delve into it and see whether they are what they claim to be, ‘the future.’

The term “metaverse” has been given numerous explicit definitions. Whatever be the description on metaverse you have come across, the concept boils down to a computer-generated realm in which people are transformed into a virtual world where they exist as an animated version of themselves and utilize the internet in a much more interactive way.

One of the most recent and widely accepted breakdowns on metaverse is the one mentioned by Mark Zuckerberg, CEO of Facebook, where ‘Meta’ means beyond in Greek and ‘Verse’ is derived from the universe. The word “metaverse” was coined by American science fiction writer Neal Stephenson in his novel Snow Crash in 1992. The concept associated with the phrase has evolved and advanced over the course of 29 years. The metaverse is the point at which the physical and digital worlds converge. It is a virtual world in which computerized versions of humans known as ‘avatars,’ interact at work and play, interact at social places, attend events, and even try on clothes. It is regarded as the next phase in the evolution of the internet since it combines features of social networking, online gaming, augmented reality, virtual reality, and cryptocurrency that allow people to engage digitally. 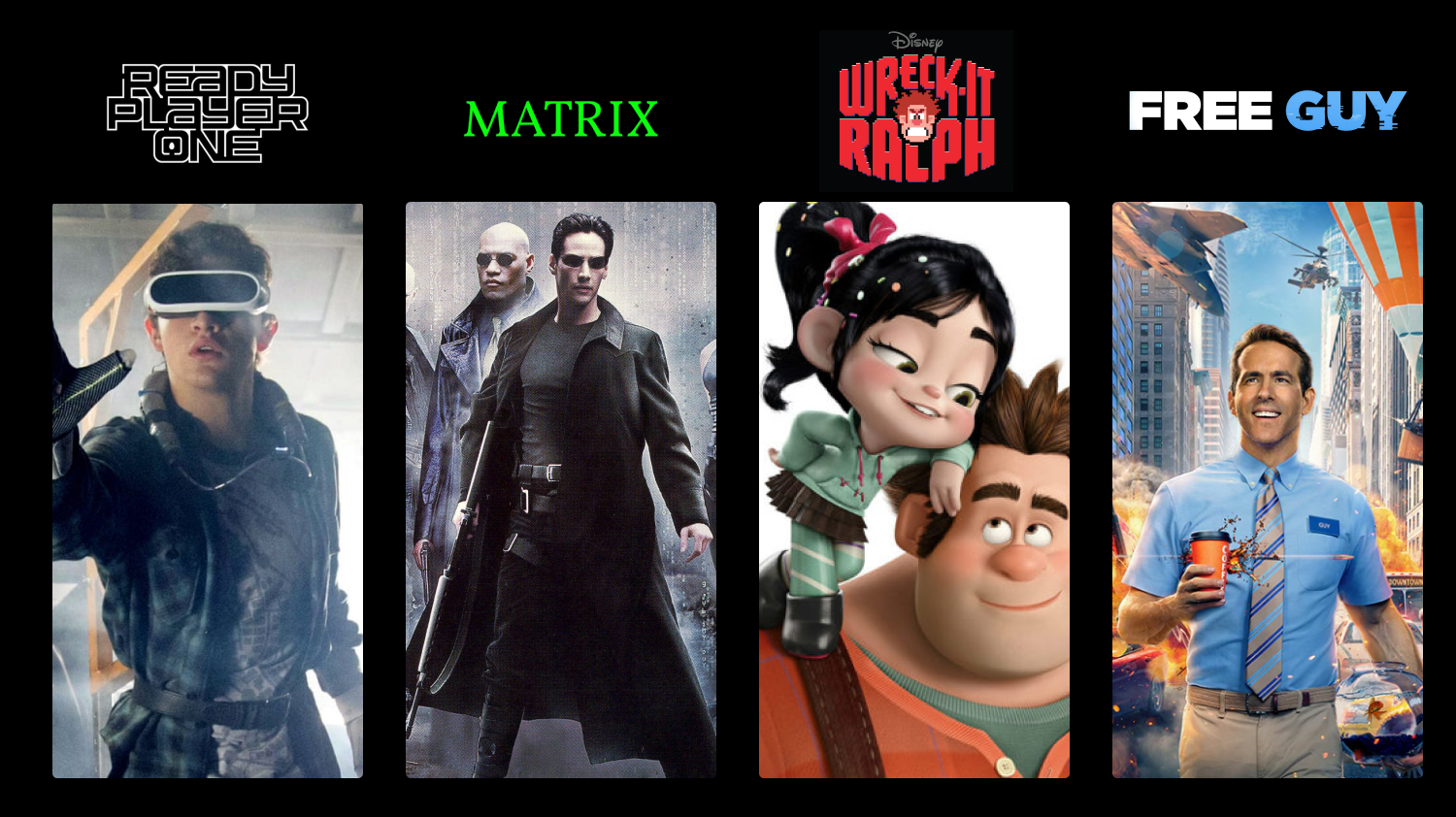 Fig: Movies on the concept of ‘Metaverse’

Numerous films, including ‘Ready Player One‘ and ‘The Matrix‘, have depicted the concept of the metaverse. As a result, the demand for the metaverse has skyrocketed. The need for people to be able to experience fantasies and create and explore with other people who aren’t in the same physical area is one of the jolt points that pushed metaverse ahead. These also paved the way for various tech behemoths as well as startups to create history.

Metaverse and its benefits: What’s the buzz all about?

The epidemic has altered many aspects of life as we know it. Despite the fact that technology has done its best to ensure that individuals are comfortable and able to perform at least partially as they would in their normal life, the desire for interaction has always been put on the back burner. This has compelled the world of technology to seek out a source that can bring interaction as a huge deal, which is why the metaverse is currently being discussed.

The current status of the metaverse and its practicality is unsatisfactory, but the benefits it may provide are tremendous. The transformation of our environments into concrete jungles is still a hot subject of debate. The Metaverse allows us to construct an entirely new world with limitless possibilities while having minimal influence on the environment. The best fact is that we can construct a computer-generated environment as large as the cosmos in the real world.

The above-mentioned benefit is just the tip of the iceberg. Many people wish for a highly interactive web. This enables us to hold large-scale gatherings, concerts, training or lectures for students, and so on, while also making them more adaptable and interconnected. They will go well beyond the confines of meeting rooms. Dealerships, malls, arenas, and virtual workplaces will be among them. Such an Nvidia creation, adopted by BMW, demonstrates the size of the fish we have in our hands. Not to mention Gucci, Vans, Coca-Cola, Stella McCartney, Burberry, Netflix, and Warner Bros. are all jumping into this market.

According to recent research, even once the pandemic is gone, the way we use the internet in our daily lives will become more prevalent. Consider the following scenario: you are set to have a holiday, but not a long enough one to go wherever you want, such as Christmas day at your hometown or a BTS concert. Fortunately, thanks to the metaverse, the festival could be brought into the cyberworld and enjoyed in person by individuals from all over the world.

All of this simply indicates that the possibilities opened up by the arrival of the metaverse. For the time being, the majority of us will connect with the metaverse via consumer-facing, interactive, and immersive virtual platforms. There is still a long way to go before widespread adoption, and some of the hurdles will include technological capabilities, closed-walled systems, intellectual property issues, and legal framework issues. But there will be a time when it will be more than that.

Several indicators have pointed to a darker aspect of this technology since the phrase was first used. The metaverse, like any other aspect of our lives, is a coin with a pleasant and an unpleasant side. It all relies on how we use technology.

The ambiguity around the changes that will occur in the future as a result of the entrance of the metaverse is continuously being debated. The fuel for such a debate is the argument that the concept of the metaverse is universally dystopian, portraying a type of authoritarian capitalism in which people are forced to spend the majority of their lives in a fictitious world owned by a multinational. Another question is what will happen to small-scale businesses, whether they will prosper or fail?

In American science fiction novelist Ernest Cline’s book, the ready player one published in 2011 is an example, where everyone is so immersed in a metaverse dubbed the “OASIS.” It’s a universe where individuals not only play games, but also go to school, work, and pay taxes, causing the actual world to deteriorate into squalor as a result of neglect. Stephen Spielberg made the same into a feature film Ready Player One that gives us a pictorial understating of the same scenario. 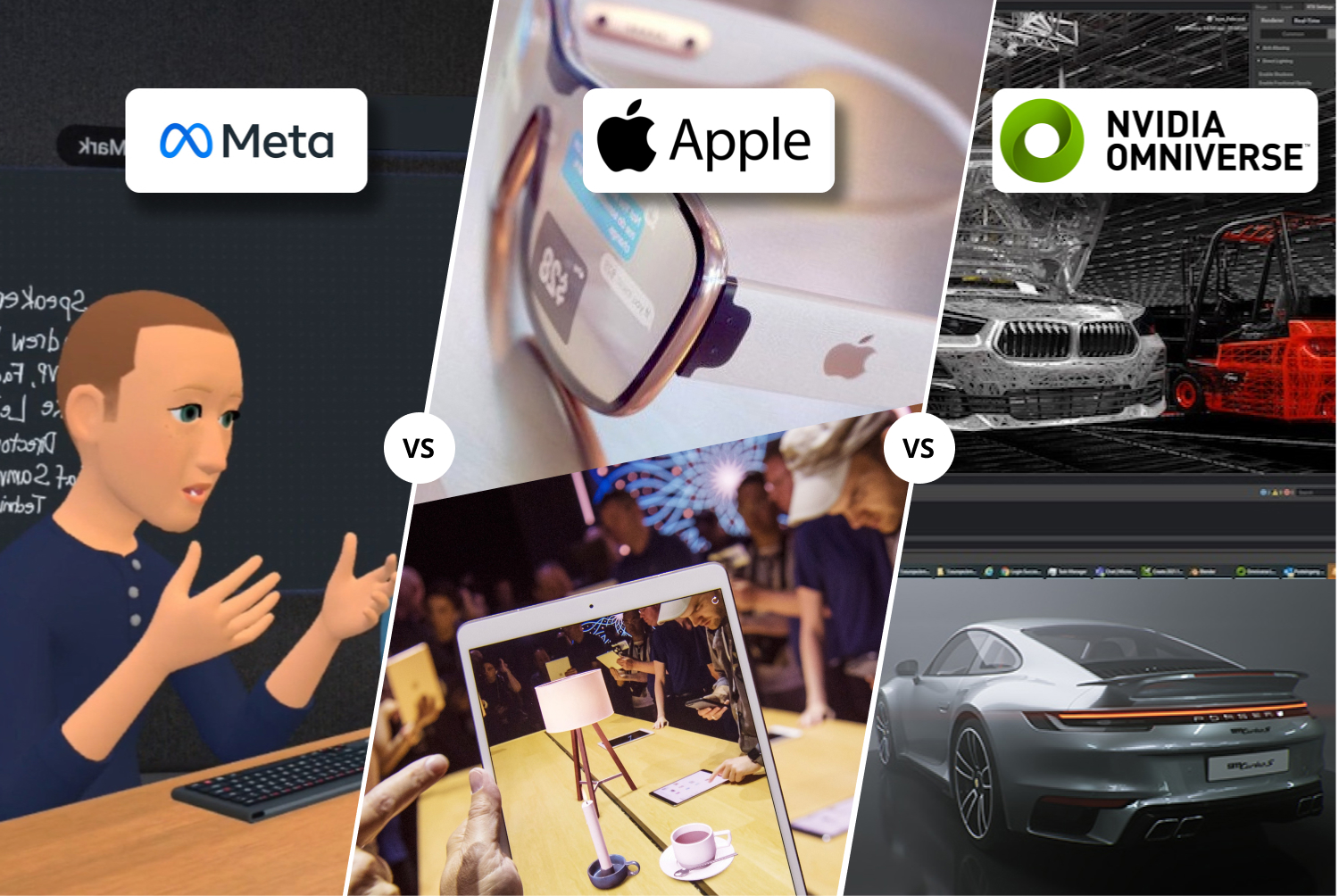 Fig:  The prominent players in Metaverse

Mark Zuckerberg’s desire to develop the metaverse exacerbated the situation. Can Meta’s metaverse be regarded as the true one, or will it be the Zuckerverse? Will VR or AR be the preferred option? The questions out there are only adding to the pile against the metaverse. The concept of the metaverse is established from VR, which takes us away from what we have in the real world. Simultaneously, the Appleverse AR approach brings virtual aspects to the actual environment to assist us. Which will triumph?

The tech titans have now turned things into a contest between Appleverse and Zuckerverse. As a result, the metaverse is in the limelight. According to some scientists and philosophers, there are few unwelcomed factors surrounding the metaverse such as depriving humans of real-world connection, lowering human values, and so on, calling into question the evolution of the internet and web into the metaverse.

For instance, the introduction of automated robots in industries has unraveled the volatile situation of humans battling over profit and job availability. The metaverse has the potential to further destabilize an already volatile world. At the very same time, the metaverse may be introduced in the future, and the debates over its dark side could still linger. Nothing is certain, including whether or not the metaverse is a depriver.

Let’s deepen our roots into what Tristan mentioned because it’s the answer to our question. The metaverse is one of the many evolutions to come. It may not be the conclusion to anything, but rather the beginning of a new era. It is within our power to make use of such a fascinating technological innovation. Instead of having the metaverse developed by a select set of people, we must only recognize it as the new phase if it is built by the people for the people. Metaverse is not something that can be kept as the home project of the 1% of the world. It is the internet as a whole, so it must be designed with the entire population in mind.